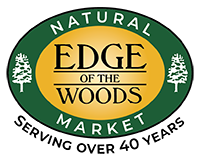 This successful, family-run, community-engaged grocery store may seem old-fashioned in these modern times filled with big-box stores and self-check-outs, but it has been a great source of comfort, especially during these unusual and unrestful times.

Stop in, Get To Meet Our Staff – someone may smile at you and remember your name … how refreshing! 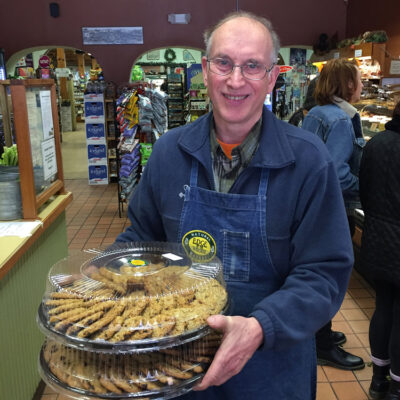 Peter Dodge opened Edge of the Woods Market in 1977 in a small grocery store on Edgewood Avenue. It was founded by a group of idealistic people whose desire was to provide vegetarian foods in a warm, friendly environment. It was owned by Ananda Marga Yoga Society and managed by Peter Dodge and other members of the Yoga Group. After A few years Peter left Edge of the Woods to put an addition onto his house and thereafter to open another store in Branford. When, a few years later, Edge of the Woods had financial and management difficulties, the Board of directors sold the store to Peter. Peter in 1986 moved the store to the historic Whalley Avenue Theater building. After an extensive renovation the store emerged into today’s Edge of the Woods. Peter continues to play a big role in the store as a buyer and director, with help from his wife, 2 sons, grandson, and great staff. His hobbies are playing guitar, harmonica, and piano. With also being an avid gardener and yoga practitioner, he lives a full life. 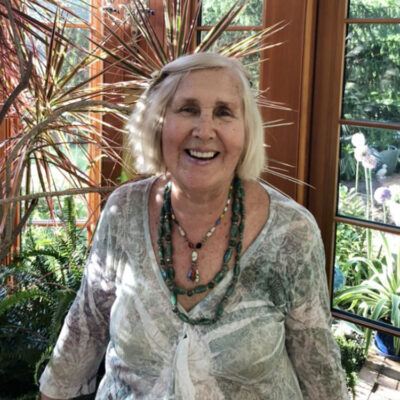 Frances and Peter met at a group meditation in 1977 and were married a year later. She gave the first donation to Edge of the Woods when it was first starting on Edgewood Avenue. Through the early development of the store, she played a support role while also maintaining her job as a nurse at Yale New Haven Hospital. In the late 1990s, Fran retired from nursing to give her full attention to Edge of the Woods. Fran still plays an active role in the business as secretary and co-owner with Peter. In her time off she is an amazing cook and enjoys spending time with her grandchildren and family. 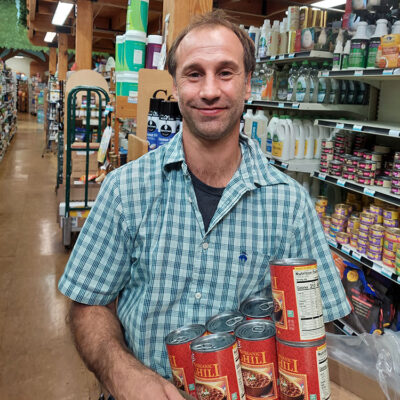 Nathaniel, Peter and Fran’s oldest son grew up with Edge of the Woods.  From a young age he was helping his father in the store.  He was a very active athlete and excelled at many different sports, most notably wrestling.  He was an award-winning wrestler and has also coached wrestling.  He attended business school at Spring field College and after college became more involved in the business becoming the buyer for the grocery and bulk departments.  He plays a vital role ordering and maintaining the grocery department (the largest department at Edge of the Woods).  Nathaniel takes the lead role in many of the projects which require working after the store closes.  He is known for his great work ethic.  He is a devoted husband and active father to two lovely girls.  In his free time, he enjoys gardening and working on projects in his yard. He is involved with a social service project volunteering at a yoga center and enjoys spending time with friends and family. 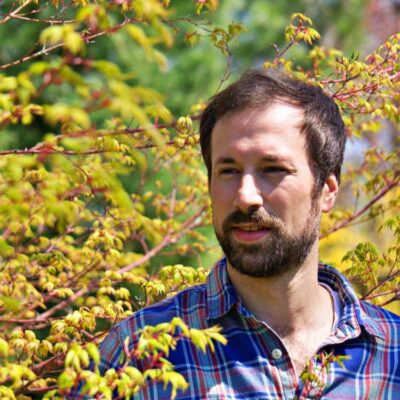 Justin, like his brother, excelled in Varsity wrestling in both Hamden Hall, seventh and eighth grades, and high school, where he became a state champion. In wrestling he had the advantage of having been trained by his brother. Through the years, he also enjoyed playing soccer. He graduated from Roger Williams University, school of business.  After college he helped manage the store and plays important roles in accounting, payroll and making store policies. Outside of work he enjoys coaching wrestling and being involved with a social service project.  He is working on his house and spending time with friends and family. 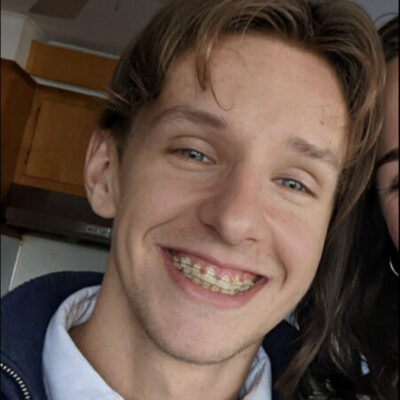 Alvin, grandson of Peter and Fran, is an essential part of the Edge of the Woods team. He has had many different roles from produce, bakery, pizzaiola, front end manager and IT manager. He is currently working on updating the Edge of the Woods website for easier customer access. Outside of the store, he enjoys working out, developing his house and spending time with friends. He is also an excellent handy man and enjoys learning new skills by figuring out how things work. 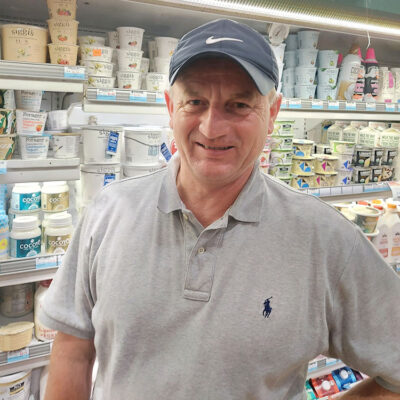 Derek a long-time employee who is an essential part of the grocery and dairy departments. He spends countless hours finding new products and great deals for our customers. Derek came to the United States with few English language skills. With hard work and determination, he has put his two children through college and continues to give the Edge of the Woods his great work ethic and sound judgement. He has been a vital part of the growth and development of Edge of the Woods and very close friend of the Dodge family. 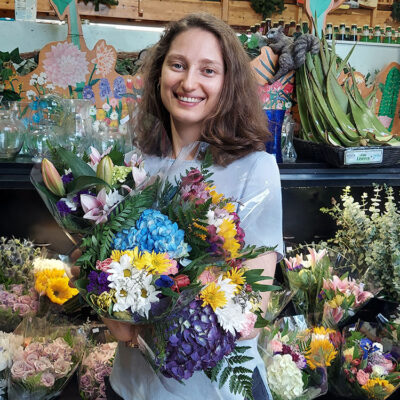 Irina “Iishika” came to New Haven to help set up and run the Seva Boutique on the second floor of Edge. After getting the boutique running, she started working as a cashier. Soon she was one of the frontend managers. She is now running the floral department and buying and managing the tea area. She plays a huge role in updating prices in the computer and has been a vibrant part of the Edge family for the past five years. This lovely, subtle person not only makes beautiful flower arrangements but plays guitar and sings devotional songs with a gifted voice which is in rarefied air. 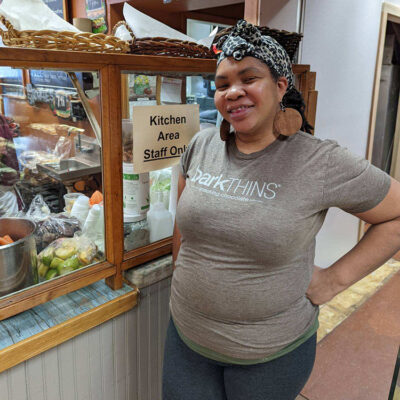 Laria, Edge of the Woods juice bar manager, has been with Edge of the Woods for 10 years serving the local community organic juices and delicious sandwiches. She has formed many great friendships in her years of service and has helped us maintain and grow the juice bar. She has a sweet personality and a vibrant character that has been a pleasure to work with through the years.

Marianne, Edge of the Woods vitamin and supplement manager, has been working for Edge of the Woods Market for over 25 years. In her time with the business, she has constantly kept up on learning about new products and maintaining her vast knowledge of the field. She not only is a vitamin and health and beauty buyer, but she also plays a vital role in developing the area bringing her expertise to all aspects of the vitamins, supplements, herbs and health and beauty department. She also spent years becoming a certified herbalist. Marianne is very sweet and helpful to all customers and coworkers alike. 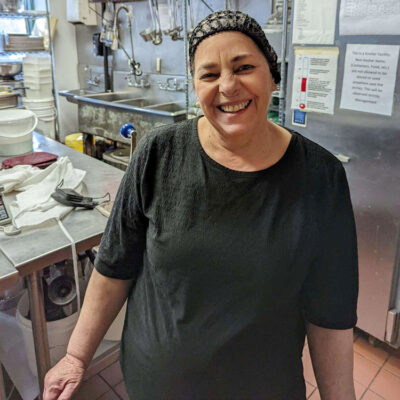 Marguerite, Edge of the Woods head cook, having honed her skills in Brazil creates delicious, nutritious foods at Edge for over six years. She, along with her staff, work hard to bring the New Haven community healthy food that taste great! And besides tasting good, Marguerite puts lots of love into her cooking. 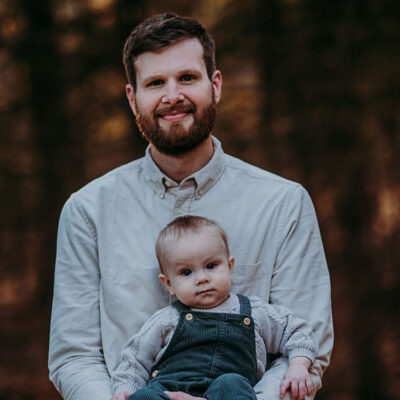 Jesse, Edge of the Woods produce and frozen foods manager, has been working at the Edge for nearly ten years now. In that time, he rose the ranks from a clerk to department head and has done an excellent job running the department and accommodating customers. Jesse is a vital part of the Edge of the Woods family. 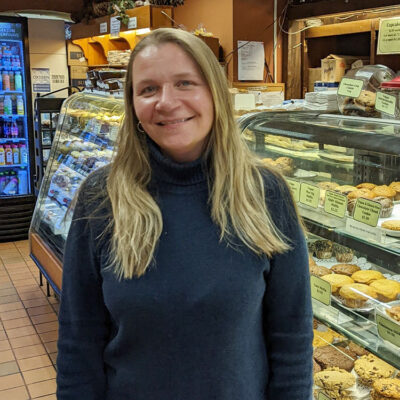 Julie’s role at Edge of the Woods spans across many different departments. She started as a cashier and quickly rose through the ranks to become head front end manager. Julie is also responsible for staffing and scheduling. She is a pleasure to work with and has created many great relationships with customers and employees alike. Julie also takes an active head role in our delivery and curbside pickup services. 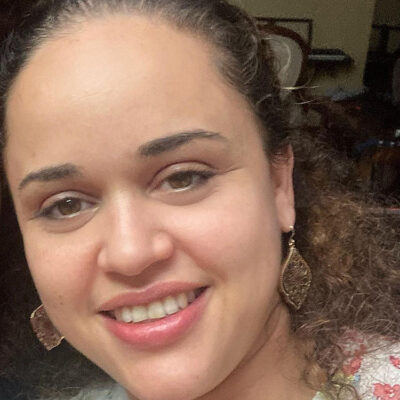 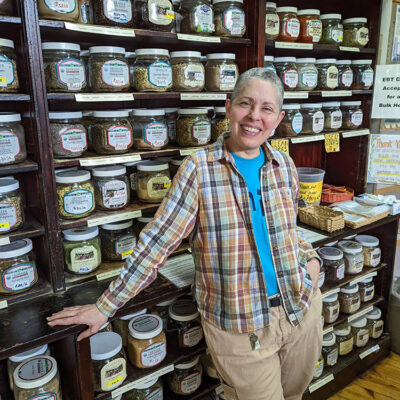 Norma, Edge of the Woods herb department manager, is a pleasure to have in the vitamin department. She is always in great spirits and has a very sweet disposition, very accommodating with customers and staff alike. She is very knowledgeable in the area and is a pleasant person to have at the store.

Christopher, Edge of the Woods dairy associate, has been an employee since 1981, this year marked his 40th year anniversary at the store. He is currently Edge of the Woods oldest employee only succeeded by Peter. Chris is an amazing artist and also has a documentary on Showtime that documents his and his family’s life. Through the years he has almost become part of the family and has won the hearts of many customers and employees alike. 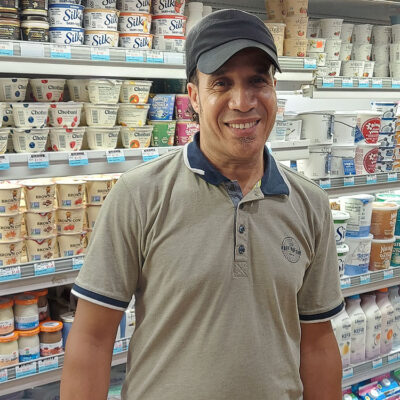 Smail “Smiley”, a 20 year employee whose hard work, friendly positive outlook, and great customer skills has made him well liked. Working in the dairy, bulk foods, grocery and, with the help of his daughter, the cheese department. He has been a pleasure to work with and plays an important role in making the store what it is. 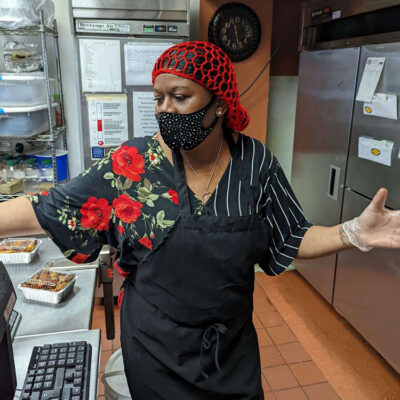 Wanda, a kitchen prep cook for Edge of the Woods Market, has been working at the store for nearly 20 year. She is a true pleasure to be around, and always has a happy demeanor and pleasant vibration.

William “Willy”, a vitamin buyer at Edge of the Woods Market, has been with the store for 15 years. He is very knowledgeable about vitamins and herbs and living a healthy lifestyle. Willy is a vital part of the vitamin department and has been a true pleasure to work with over the years.

Tracy, the assistant baker at Edge of the Woods Market, has been with the store for 13 years. She is an excellent baker and is very knowledgeable creative and skilled in her department. 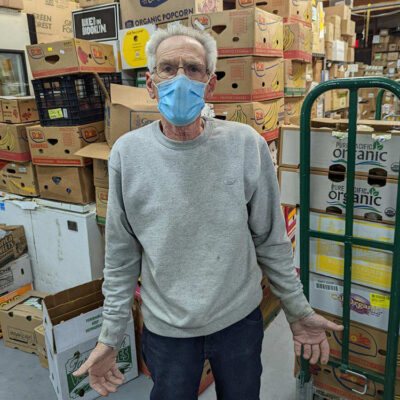 Ray, has worked for Edge of the Woods Market for nearly 12 years. He spends every morning working on maintenance and cleaning and afterword’s helps set up the produce department. He is a really fine fellow that is always willing to go above and beyond to accommodate others and accomplish his work.